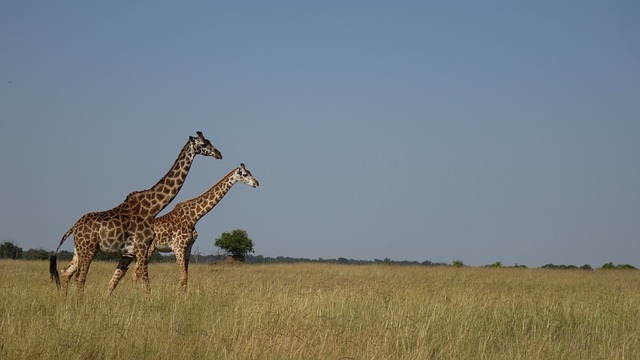 When I tell people the name of my life coaching practice—Giraffes Consulting—quite often the next question is something along the lines of “Why giraffes?” Understandable reaction. There are actually four reasons why I developed the Giraffes Theory as the basis for guiding people through times of change—a full explanation can be found here. But today, I want to hone in on just one reason why I chose the giraffe as an inspiration: Giraffes are far-sighted.

While on a trip to South Africa, I had an opportunity to observe giraffes up close, and one thing that struck me about them is that due to their height, they are able to see further than the other animals. In other words, they have a broader horizon. That’s such an important trait for us humans to have in times of change and transition. The more we can expand our own horizons, the more possibilities we can see for ourselves, and the more options we’ll have. That’s why I encourage my clients to develop a “far vision” for their lives—to see past the immediate moment of changing circumstances and to plan for life beyond it. In my experience, it’s the best way to maintain a sense of empowerment and control in times of change.

So…how do we become far-sighted? Let me offer 5 ways you can start expanding your own horizons.

What do you want to do in your life that you haven’t already done? What do you want to learn? What dreams have you had that perhaps got pushed to the back burner? Some people think of this type of thing as a “bucket list,” but I’m not talking about a list of things you want to see and do before you die—I’m talking about things you want for your life. Feel free to include the immediate needs of the moment, but also think beyond this moment to what you might want to accomplish in the years ahead. Write down as much as you can think of. You’re not committing to anything at this time—just brainstorming for now. But it will get you thinking of the future, and that’s what being far-sighted means.

Steve Jobs. Elon Musk. Nelson Mandela. Heck…Albert Einstein. Think about people you know, both past and present, who thought ahead of their time and whose ideas have helped change the world. Who are the current thought leaders of your industry? Who are the forward thinkers you know and respect? Pay attention to what they’re saying; read their books, listen to their podcasts, follow them on social media. Listening to the words of far-sighted people will take you a long way toward thinking the same way.

What have you always wanted to do that you never learned to do? Think it might be time to try it? Don’t buy into the old-dogs-new-tricks myth; we’re more capable of learning than we give ourselves credit for. Picking up a new skill opens up for you a whole new world of opportunity. Talk about expanding horizons.

4. Envision your current skills in a new context.

I worked in human resources for 20 years. Today, I have a whole new career as a life coach. Guess what? The skills for human resources and life coaching are essentially the same skills. I just put my H.R. skills into a new context. The point is that whatever you are good at, chances are you can apply that skill in a different way. Stop limiting how and where you apply that skill and think how you might use it in another context. You’ll be amazed at how this can open your world.

This one’s pretty simple: You can’t see the horizon in front of you if you’re constantly looking backward. This also ties into the last point: You can’t reimagine your skills in a new context if you’re wasting time wishing the old context would come back. Don’t be the person who grumbles about the way things used to be. Change happens. It just does. Leaving the past in the past is one of the best ways I can think of to start noticing a wider horizon in front of you.